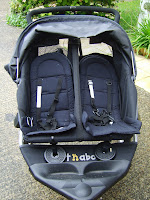 When I was pregnant with our baby, we decided to buy a double buggy to take the toddler and her new sister out for walks. Little did we know then that we would rarely be using it as our toddler can walk for miles and miles! Hey, the thought was there though :)

Anyway, we have used it a bit now and I thought a personal review might be of interest to anyone who is looking at one of these double buggies.

We had a look at a number of doubles, from side by sides through to the ones where it looks like one of your children has just been shoved into the shopping basket. None we liked. We wanted a very easily manoeuvred 3-wheeler that we could use off-road too. Having scanned the Internet, we decided on the Out 'n' About 360. We had tried out numerous doubles before in shops but nothing seemed quite right. This one looked perfect we thought so we ordered it from Boots. Huge mistake :(

The day of delivery arrived and we excitedly put the pushchair together. It looked nice and the toddler liked it and jumped straight in with teddy for a ride :)

The 360 is very easy to use one handed and 'turns on a sixpence' (if you happen to have such an old coin still). The wheels are sturdy and the braking system is excellent, if not exceedingly simple. The hood is a lovely size and provides excellent coverage for your children and the rain cover (part of the kit) is a great size and easy to put on and off. It fits though most doorways unlike a standard side-by-side double. There is a great strap to put around your wrist to stop it running away from you downhill too (not that I've lost a pushchair yet like that!). It opens and collapses OK but I'd be pushed to tell you it was not a fiddle at times. And that's where the good stuff ends I'm afraid.

We have encountered a number of things that make this pushchair severly lacking:

I wish that we had been able to view the pushchair prior to buying it. All the reviews on Boots website (which is where we bought it from) said it was brilliant and we believed them. More fool us! I guess if you're going to use it for just a walk, it's fine. If you want it for shopping or really taking your children out, it's not a particularly 'mum friendly' pushchair. For £315 you'd expect a bit more value for your money I think. Sadly, as we bought it some month or so before our baby was born, we didn't get to find out all the problems until it was out of its return period or it would have been back like a shot!

I have, as you can imagine, complained to Boots about all of these things very soon after giving the pushchair its first outing. They were less than interested and offered nothing in terms of answers or options.

Take my advice, if you need a double, make sure you go check EVERY one you like the look of. If the shop won't get it in stock for you (as Boots wouldn't) to check, don't buy it!

at August 26, 2011
Email ThisBlogThis!Share to TwitterShare to FacebookShare to Pinterest
Labels: Product Review