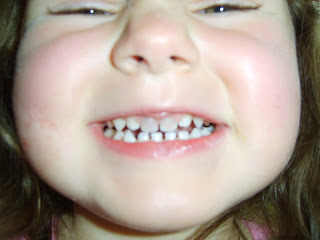 Three weeks ago, S was getting a little over-excited playing with J bouncing around on the sofa (no, she's not supposed to be jumping on furniture but that's another story) and suddenly, went a bit too far forward and hit her mouth on the windowsill.  The scream went up instantly.  Hubby and I rushed over to her and, after consoling her and getting her to calm down a bit (which took some considerable time), we looked at her mouth.  Her top lip was swelling to a fair size but I was more concerned about her teeth.  Gently getting her to open her mouth and, with the greatest care that I could, I moved her swollen lip out of the way a bit and checked her teeth.  All in place, no bleeding and no wobbles that I could detect.  Phew, that was a lucky escape.

Her lip stayed swollen for just over 3 days and she talked with quite a lisp, bless her.  The swelling began to go down and by the end of 5 days, she was back to normal.

About a week ago - 2 weeks after the bump - I noticed that her top two front teeth were looking a bit darker, as you can see in the picture.  Hubby said perhaps she wasn't brushing them very well.  This couldn't be the case as she brushes her teeth morning and night and whilst I let her do the morning brush all on her own, the nighttime one I do with her to ensure that she has clean, sparkling teeth for bedtime.  In fact, neither she nor N will go to bed until their teeth have been done so even if it's late and, for some reason, we forget, we are soon reminded :) Anyway, I made sure they were brushed well morning and night but they didn't seem to change in colour. In fact, they were getting a bit darker.

A few days later, we were having dinner and I noticed that they were getting quite grey in colour.  Would you believe both hubby and I had forgotten about the bump to her mouth!?  Well, kids do so many things and I think we'd need a portable diary if we wrote down every bump/scratch/twist that happened to them both.  On realising this could have something to do with her mouth being banged, I looked up teeth getting darker on the web.  I found two excellent resources regarding teeth changing colour.  The first from Pediatric Dentistry which helped me to confirm what was happening and the second from Tom at Oral Answers who is an active blogger dentist.

I phoned our dentist and today we went on a visit to her.  S has no fear of dentists (unlike me who is terrified of them but getting braver with my girls watching me!) and she hopped into the chair whilst N tried to join her :)  Our lovely lady dentist took a look at her teeth and confirmed that the problem was indeed due to the trauma to her mouth and it was very common in young children. She said it all looked clean and no problems, a very minor bit of movement  but she felt her adult teeth should be just fine.  She did tell me that her teeth were unlikely to get whiter again (which some people have said happened to their children) as they were, in effect, dying.  However, they were also unlikely to get much darker either.  She told me to just watch out for any bumps on the gums as this can be a sign of an absess.  So, so far, so good.

Children are sent to keep us on our toes and our nerves in tatters aren't they! ;-) 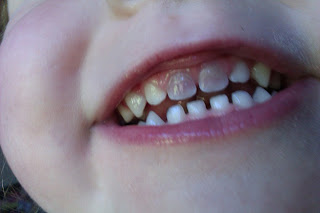 I thought I'd add a quick update to this.  Now, almost a week later, S's teeth are going even more grey/red.  I'm starting to notice it and it breaks my heart to think she will have her teeth like this for the next 3 or so years but what other options are open (certainly not going to have 'fillings' to make them white again or veneers).

UPDATE: 1st August 2012 - S's teeth are beginning to pink/white up again! I can't believe it but it looks like the damage isn't permanent despite what the dentist suspected.  We are making a very careful effort with teeth brushing in the evenings to ensure that her gums get a good little massage around those front top teeth so whether that is actually doing anything or not, I'm unsure but I'm pleased with the result so far :)

Here's a photo taken on 3rd August.  Almost back to normal :)  Glad our dentist was wrong! 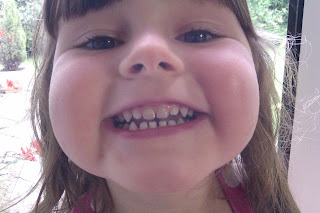 UPDATE #2: May 2015 - For anyone who would like to know how she's getting on now, in 2015, she's losing her teeth slowly and as you can see from this picture, those top teeth look almost exactly the same as the others.  She's very proud here that she's lost her second bottom tooth. Top ones are next!  I'll update you when the new ones come through there. 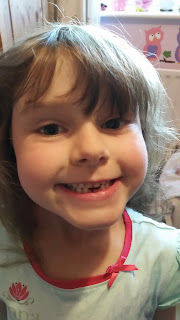 UPDATE #3: November 2015 - I had a lot of requests for pictures of S's new top teeth when they come through.  One is almost through completely now and the other is just starting. Here's a photo taken today (22nd).  Hopefully you can see that the tooth is the same colour as all of her others.  Hooray! Will let you know when other one is through and post again then. 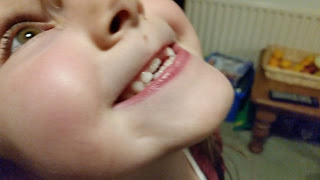 UPDATE #4: March 2016 - Here we are with both front teeth now firmly through (sadly she's still suffering cold sores as you can see but that's another post). I hope this gives people hope for their little ones.  Thank you for all the wonderful comments. 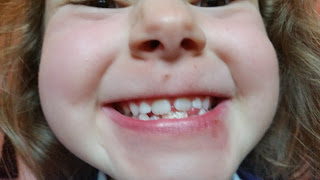 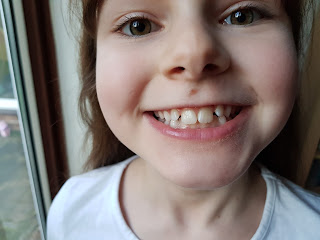