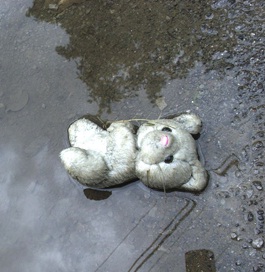 At least, that is what I thought until I had my first one.

What was the fuss about?  So, you're pregnant and you've missed your period, you've done your test and the line has appeared.  Then, out of the blue, a few weeks later, your period starts.  It's clearly a miscarriage but so what?  There isn't anything much there is there?  It's only a heavier bleed after all. It's not like it's a proper baby or anything.

I had my first miscarriage in 2007.  We came back from holiday and my period didn't start.  I honestly did not think I could be pregnant so did a test and the positive result came up.  Immediately the emotions hit me - both the joy and the fear.  The excitement took over as hubby was just so made up to think he was going to be a dad.  We talked.  We would wait until after the 12 week check and then tell our family.  We waited...well, about 30 minutes....then called folk up.  The excitement went around our families and close friends quickly.  I found a Haynes Manual online about babies and bought it ready to give to hubby at our 12 week scan.  I called the doctors and went down to officially confirm my pregnancy and had a booking in appointment with the midwife.  How exciting!  Everything seemed to be going well.  The sickness started.  This was a good sign right?  And then....

....I woke up in the early hours of a Saturday morning at the end of September bleeding.  Hubby was on a night shift so I called him in tears. He held it together for me and said if it was still happening in the morning, we'd go to A&E.  I hardly slept.  I kept checking.  Maybe the bleeding had stopped a little?  I went online and Googled.  If the blood was a brown-ish colour it could just be 'spotting' and hopefully everything was going to be ok.  Who was I trying to kid. There was nothing brown about this. It was bright red and getting worse.  Morning arrived and hubby came home.  I had phoned the midwives and they said this can happen and everything may still be ok. Try and rest.  I tried (and failed).  By lunchtime we went down to our local A&E.  Same things were told to me then but there was nothing that could be done until Monday at the EPU (Early Pregnancy Unit).  They said go home and rest and call the EPU first thing and they would see me.

Monday arrived. Our 1st wedding anniversay.  We went down to the EPU.  I had an internal scan.  The sonographer wasn't exactly kindly.  No baby, she announced.  Nothing there.  You've clearly already lost it.  Thanks for your care and gentle words - not.  We cried - both of us.  We were very upset.  Maybe I was too old to have any more children?  We went home. Not an anniversary to celebrate.  Hubby was due to start Jury Service that day but had phoned the court to explain.  No problem they had said, come in on Wednesday.

That day arrived and off he went.  I was still curled up in bed when a friend called to see how I was.  We spoke and as I sat up, it came out of me.  It wasn't just a little bit of blood, it was large and I felt it leave.  Clots and what seemed a huge lump. I cried like I hadn't cried before. I hung up on my friend and phoned the court. Hubby arrived home within 30 minutes.  I didn't know what to do with 'it' whilst I was waiting. It was there, in our bed.  I phoned the hospital. They said flush it away or put it in a clean jar and bring it down so they would confirm the miscarriage if that's what I wanted. I wanted neither of those.  Eventually, just before hubby came home, I put it down the toilet.  We were sad for a long time afterwards.  I know that it is likely something wasn't right and that's why it went but it still hurt.  I put the manual I had bought away hoping there would be a time I could give it to hubby.

Our daughter, S, was born in 2008.  I had 'spotting' with her and you can imagine the fear that washed over me and hubby.  We had an early scan with her and there she was.  Utter joy!

In 2009 I was pregnant again.  Sickness was well and truly happening and our 12 week scan was booked for the clinic in London.  Off we went on the train, leaving S with my niece.  We waited excitedly for the scan and both had butterflies when we went into the room.  The sonographer put the gel on and we watched.  There was the sac but there was the tiniest little 'blob' inside.  She was quiet for a moment and did a few measurements.  It was clear, I had a missed miscarriage. The news still made us cry.  A doctor came in to confirm it. It looked like the baby had stopped growing around 5-6 weeks.  It was a long train journey home.  Worst of all, I still felt sick. My body thought I was carrying a good pregnancy. I phoned the hospital I had had S in (not the local one - wouldn't go back there) and went down for a scan straight away.  They confirmed the missed miscarriage and booked me in for the Monday for an ERPC in day surgery.  I felt sick still the whole weekend and up until I went under.  It had stopped when I came round.  I was out that evening.  Somehow, although still so sad, this miscarriage didn't have the same affect on me.  I think it was just a bit more clinical in my head.

In 2010 N was born.  Again I had spotting and an early scan. That reassurance meant so much.

So, to anyone who has never experienced a miscarriage, please be assured, it is not just like a late period.  It is far more than that and more devastating than you could imagine.